For the first time, AVIAHELP took part in one of the largest global aerospace exhibitions Aero India 2019 held from 20 to 24 February at the Air Force Station in Bangalore, Karnataka. The Indian air show is organized by the Ministry of Defense and the Government of India, as well as the Organization of Defense Exhibitions. 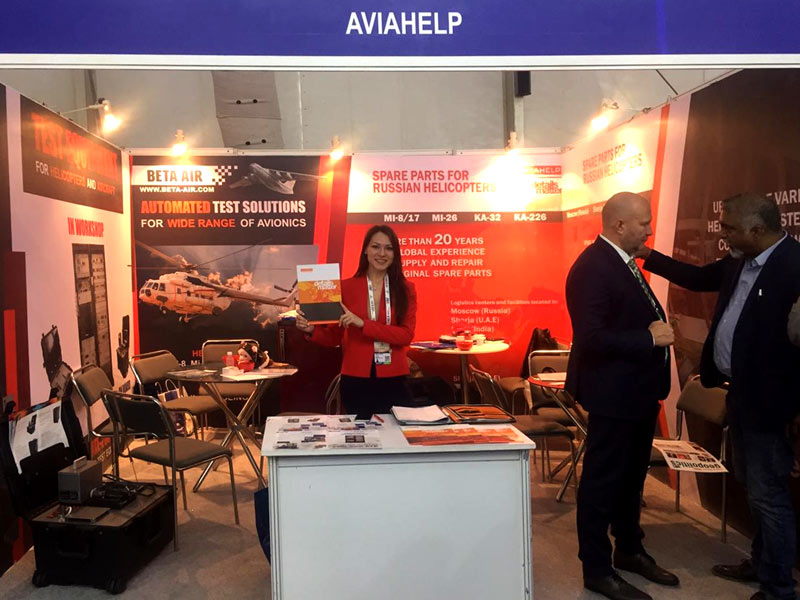 Aero India 2019 is the 12th edition of the aviation fair. The Indian Air Show has been held every two years since its inception in 1996. This year Aero India gathered 403 companies from 51 countries, including 11 Russian defence enterprises and holding organisations, whose stands covered an area of almost 1000 sq. m. The total number of visitors of the event exceeded 100 thousand people.

The event stands out not only for its scale, but also for the grand everyday air show, which includes performances and presentations of the newest models of aircraft manufacturers from different countries. The 12th Indian exhibition organizers have pleased thousands of spectators and participants of the air show with the breathtaking air parade demonstrating fighters, attack helicopters and aerobatic teams. The air show was attended by Indian Prime Minister Narendra Modi, Defense Minister Nirmala Sitharaman and other members of the Government, that, certainly, enhanced the status of the event.

During the Indian Air Show, AVIAHELP successfully presented a range of its services, namely the supply of aviation spares for Russian aircraft and helicopters. During the exhibition, the company employees conducted a series of business meetings and negotiations with foreign representatives of aircraft operators.

“India is becoming the new center of the global aerospace industry and serves as an important communication platform for manufacturers and suppliers,” said Yuri Ridzel, the General Director of AVIAHELP. “In this regard, we were happy to be part of the international exhibition Aero India 2019, which strengthened AVIAHELP's current partnership with Indian companies. Moreover, the negotiations provided new favorable prospects for the supply of spare parts for Russian-made air transport to India, where aircraft from Russia makes up a significant share of aviation technology. It is worth noting that the reasons for the successful work of AVIAHELP in the aviation service market are the control of the authenticity of aircraft spares, as well as the high level of consumer service, ensuring well-organized logistics, high-quality repair, insurance and financial competencies. ”

AVIAHELP company has a long-term successful cooperation with Indian partners, as evidenced by the company's largest trade turnover with India.

*** AVIAHELP is the leading independent supplier of aviation spares, consumables and ground equipment for Western and Eastern types of aircrafts, helicopters of Russian production, providing guaranty of authenticable avia spares for aviafleet globally.